The short sequence of film Tim took on that April morning was astonishing; nothing like it had ever been seen before. 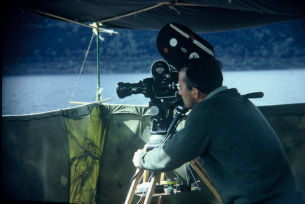 The similarities between many eye-witness accounts and what Tim had filmed were striking.

Shortly after returning from Loch Ness, Tim was invited to show his film to the world via the BBC’s popular current affairs programme, Panorama. Watched by millions, the Loch Ness monster was transported into households the length and breadth of the UK.

The broadcast ignited debate across the British isles. Arguments in pubs and discussions at universities all asked the same question: could such an animal exist?

The British scientific establishment of the day was indifferent to the prospect of a large, unknown animal living in their very own backyard. Tim’s film received short change from these learned folk, some of whom were steadfast in their blanket refusal to accept that an animal of such size and proportions could possibly be living in a loch in Scotland.

This apathetic attitude annoyed Tim, although he readily admitted the image on the film was a rather poor indication of what he’d seen through his binoculars. At extreme range and slightly under exposed, the film lost much of the detail he so vividly recalled seeing. In spite of these shortcomings, he questioned the lack of curiosity from the very people who, in his mind, should be those most interested.

Tim decided the best way to convince skeptics and the doubting zoological fraternity would be to better his already incredible evidence. He rationalised that if just six days of intense watching from the shoreline had allowed him to capture the animal on film, then doing it a second time shouldn't present a huge challenge.

He revisited Loch Ness again in July of that same year, but Nessie began to play her elusive game — for which she had a well deserved reputation - and was to become a familiar theme in the years to come.

Undaunted by the lack of success on his second trip, Tim continued to return to the loch each summer. 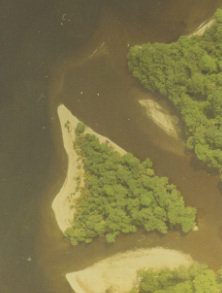 After many long hours of lonely shore watching and the lack of results, he considered perhaps his luck on his first expedition might not be repeated. However, his despondency lifted with the release of a prestigious report regarding his Nessie film.

The Royal Air Force investigation unit, Joint Air Reconnaissance Intelligence Centre (JARIC),  had carried out a detailed analysis of Tim's film and came to an encouraging conclusion. This world-renowned body of long-range photographic experts stated the film was genuine and the object was neither a boat nor a submarine, so was probably animate — meaning it was alive!

This statement galvanised Tim. He knew what he had seen and filmed that day wasn't anything that could easily be explained. And now photographic specialists had placed a seal of validation upon the film strong enough to null any doubting arguments.

After spending a number of expeditions camping on a small island at the mouth of the Foyers River, situated opposite the spot where he'd filmed the creature, Tim decided it was time to became more mobile. He purchased a petite 16-foot cabin cruiser, which he named Water Horse.

He draped the small craft in camouflage sheeting to add a degree of stealth should the animal surface nearby. The boat was bristling with cameras of all shapes and sizes. And just in case the monster did surface close by, Tim added to his arsenal of monster-hunting paraphernalia a crossbow with skin-sampling darts. 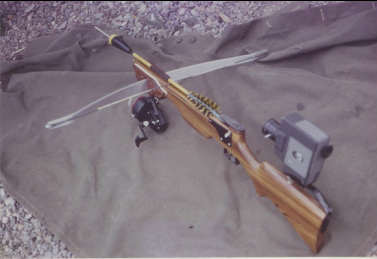